Sacred Heart Oratory is a historic and architectural treasure. The 19th century artisans who worshipped here incorporated the best architectural elements of the day — from the nearly 50 exquisite stained glass windows to the 65-foot-wide sanctuary ceiling. 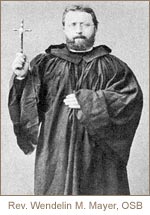 It began on a summer day in 1874 when the Rev. Wendelin M. Mayer, OSB, arrived in Wilmington. The city’s German Catholics had not been able to have Mass or confessions in their native tongue, because the last German-speaking priest had left 15 years earlier.
Eight days after he arrived, Father Wendelin celebrated a German language Mass in the city. He quickly contracted to buy the city’s old circus grounds and build a German Roman Catholic church.

According to accounts from Benedictine nuns who taught at Sacred Heart School, the priest and parishioners stood side-by-side digging the church basement with spades — a basement half as long as a football field and 65 feet wide. When the basement was dedicated on a warm April day in 1875, nearly 2,000 people waited hours in the sun to get in. It was as if the church were the center of a European village.

As the 70 foot high walls of the church were constructed, Father Wendelin slipped medals of St. Benedict between the bricks. He did not live to see Sacred Heart completed. He died of consumption in 1881 when he was 49. Two years later, the church he envisioned was dedicated.

In 1891, Father Sylvester Joerg, OSB, became director and pastor. The church expanded from its German roots, and generations of Wilmingtonians from all ethnic groups were baptized there. In the church’s heyday, an adult choir was accompanied by a full orchestra, ushers wore tuxedos for Christmas midnight Mass, and the church was so packed they opened folding chairs in the aisles. 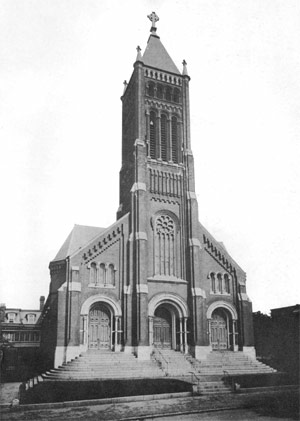 Neighbors lit candles for their loved ones during World WarII, and G.I.s prayed for safety before shipping out. Sacred Heart was home to War Bond drives, Irish dancing, bazaars, card parties, scout troops, and chicken-and-dumpling dinners.

Then, in the 1970s, Interstate 95 bisected the parish, and attendance at Sunday Mass dwindled. The Benedictines reluctantly requested from the Bishop to close their church as a parish. They asked the Capuchin Friars who founded the Ministry of Caring to purchase the city block that houses the church, rectory and school. MBNA America helped the Ministry of Caring purchase the property. The school building and a new construction were combined to create Sacred Heart Village, a 78-unit affordable housing complex for senior citizens.

The church has been completely renovated and reopened as Sacred Heart Oratory. Masses are held every Sunday at 9:00 a.m. and Monday through Friday at noon.